Our first local game jam was yesterday, and it was a great success. This was a part of Heritage Days for Kids, something we’ve been doing for the last five years. 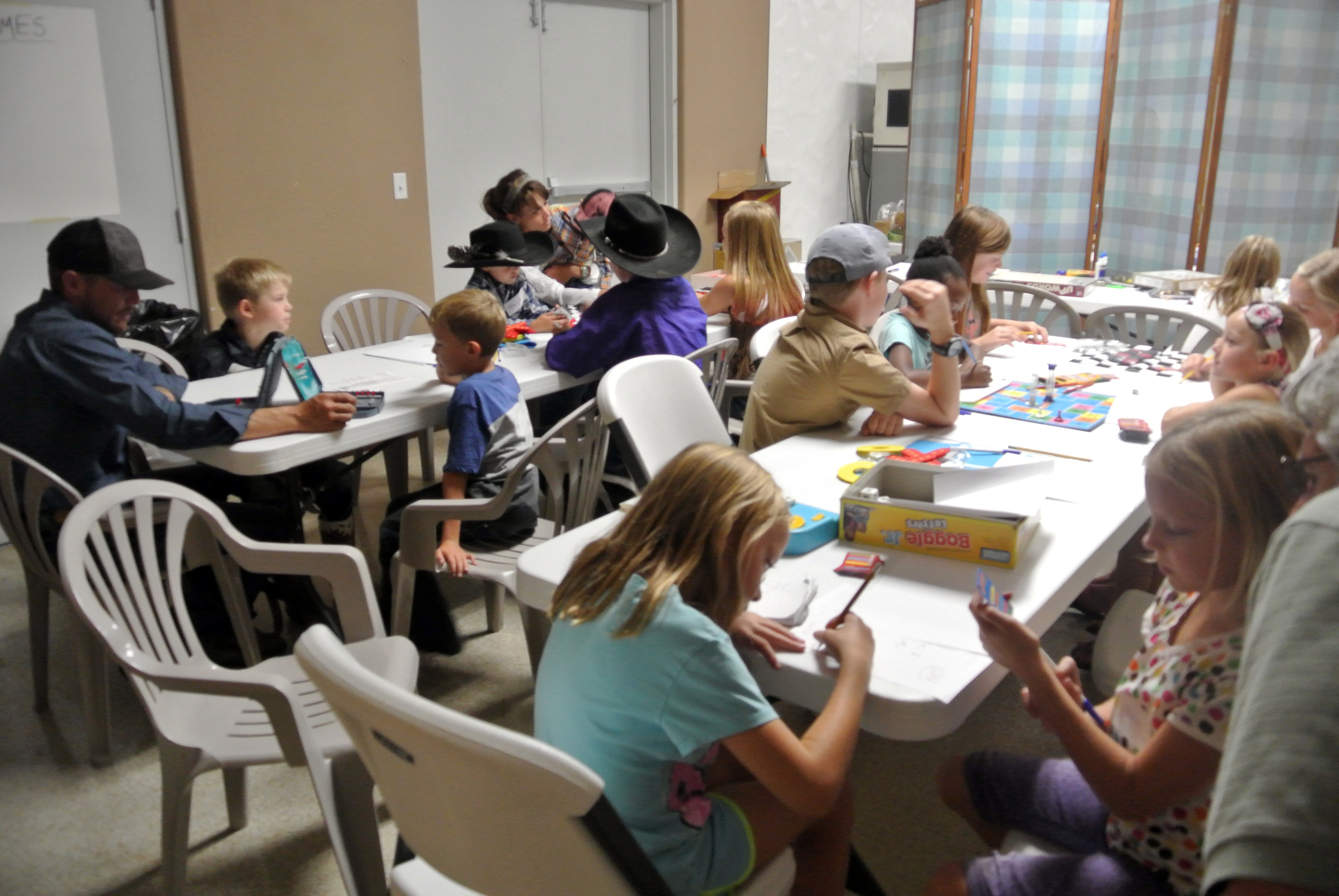 Our local kids events have some interesting challenges, not the least of which is that we never know how many kids (and adults) will come, nor the ages of those kids. As such, the agenda is very flexible. Yesterday, we had the additional challenge of a new facility, which turned out not to work very well, especially because we had a record turnout of 28 folks (which was both good and bad). Next year we’ll need to find a new place to hold this event.

Here was the planned agenda:

Beginning with playing games was great. It’s always hard to get kids going on stuff, especially with a mix of ages and kids who don’t know each other. Having a variety of games laid out on the tables was a good way to begin and also provided a foundation for the discussion of “what makes a game?” The favorite games were Pictionary Junior and Battleship. There was also one kid who spent much of the day refining his chess game with Brad as a partner. It was also fun to watch kids make up their own variations on these games, especially adapting for different age levels.

This was also a good example of the “shared purpose” value in Connected Learning. Kids had the shared purpose of figuring out how to play a game, and this provided an opportunity to make new friends, get comfortable, and accomplish something together. From that, the whole day flowed. 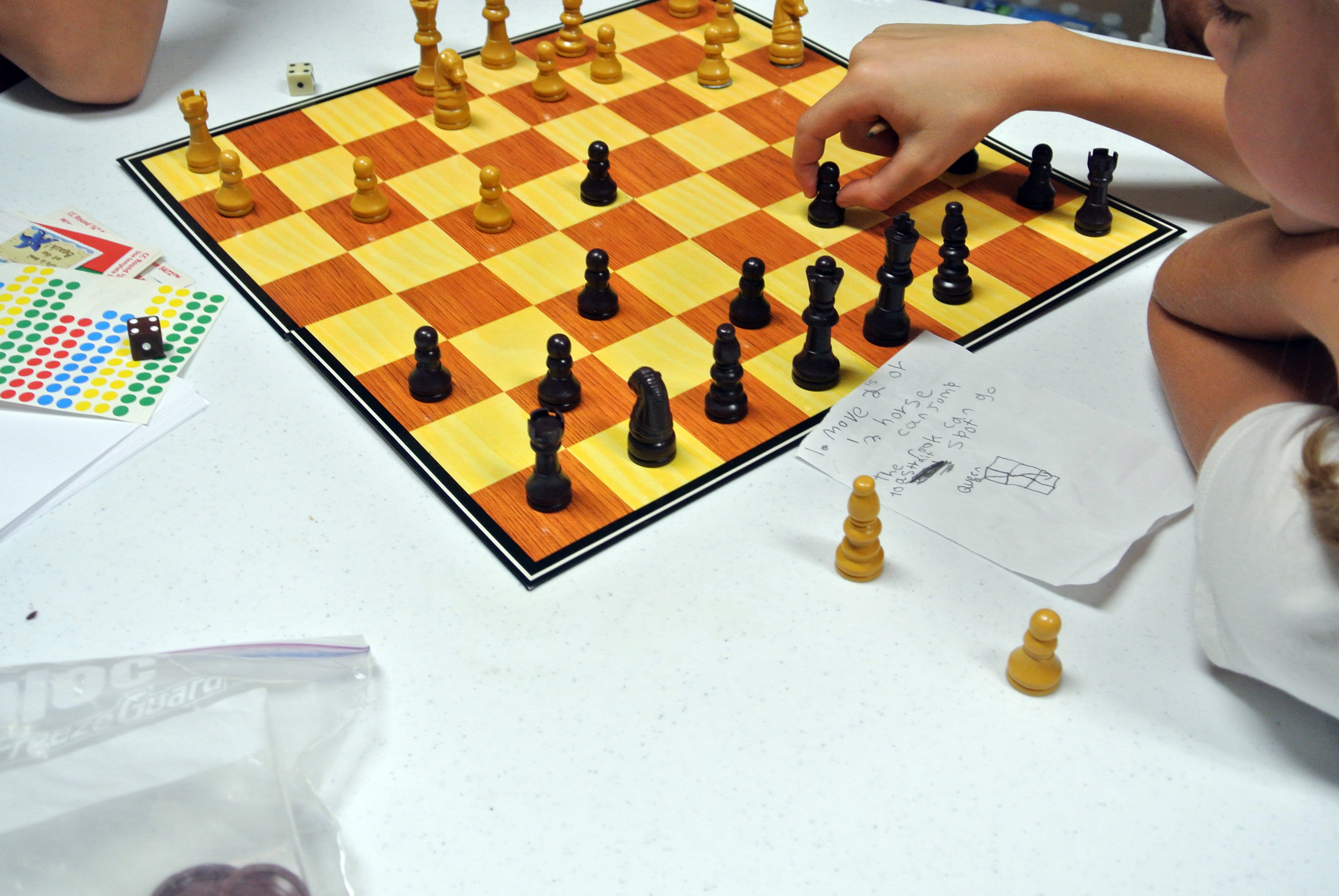 Next we talked about what makes a game. This worked well as a guided discussion, and everyone participated. I wrote the components of a game up on the board and saw later that one child had dutifully copied down the same. Something that one kid insisted on for every question I asked was that games had to be “FUN!” Good point to remember. 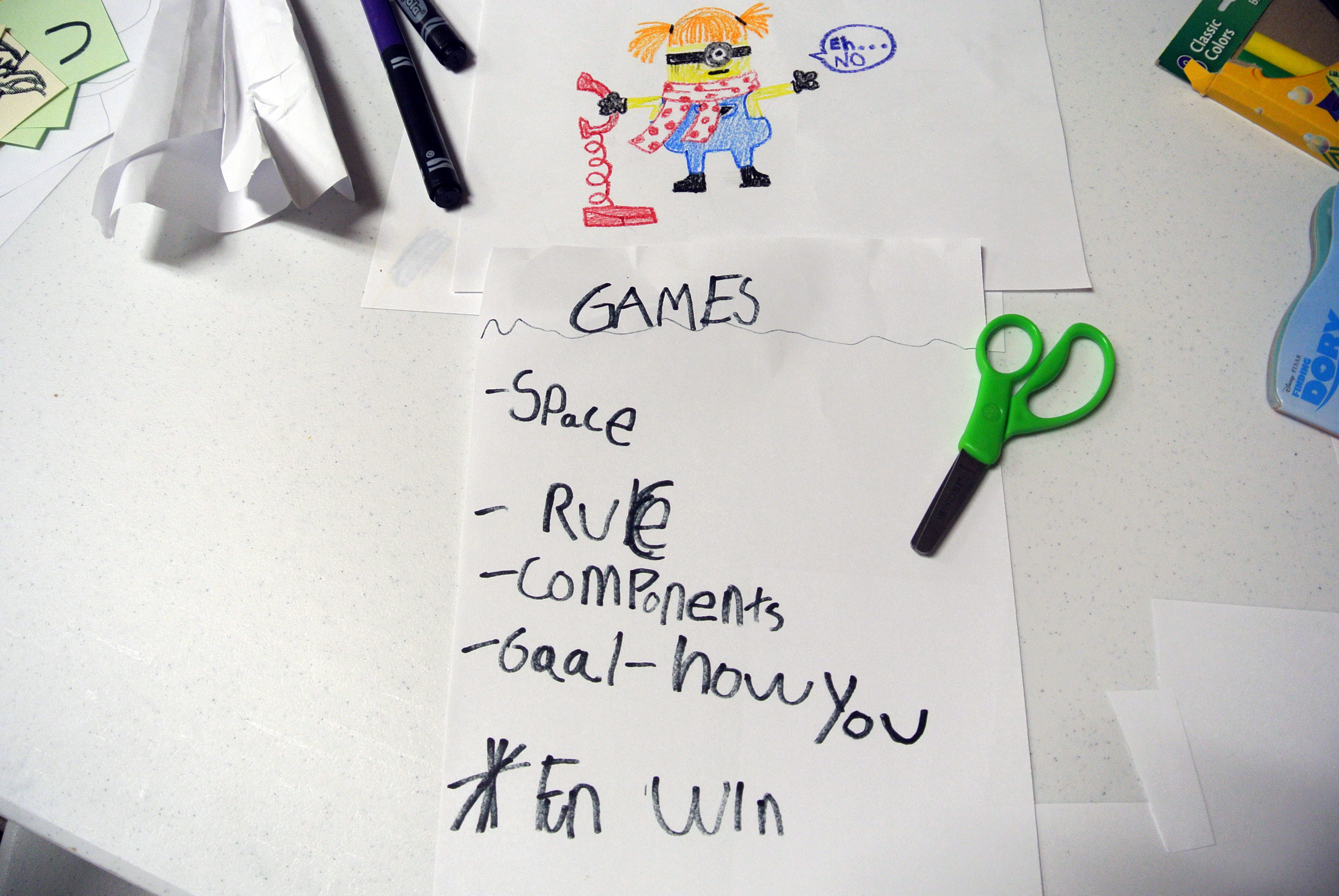 After that, I’d planned to do a “hack tic-tac-toe” activity, but because of time and the challenge of having some very young kids that didn’t know tic-tac-toe, I decided to skip that activity. (Interestingly, later when I found the kids outside playing a spontaneous game of duck-duck-goose, we “hacked” that instead.)

Then we moved on to the best activity of the day, in which kids got into groups and designed their own games using a set of supplied materials. We supplied: two dice, four marbles, a piece of string, four paper cups, a bunch of cork “game pieces” of varying sizes, colored paper cards, round colored stickers, and a piece of posterboard. In addition, kids could use any of the crayons, colored pencils, markers, tape, glue, scissors, etc. that were there. 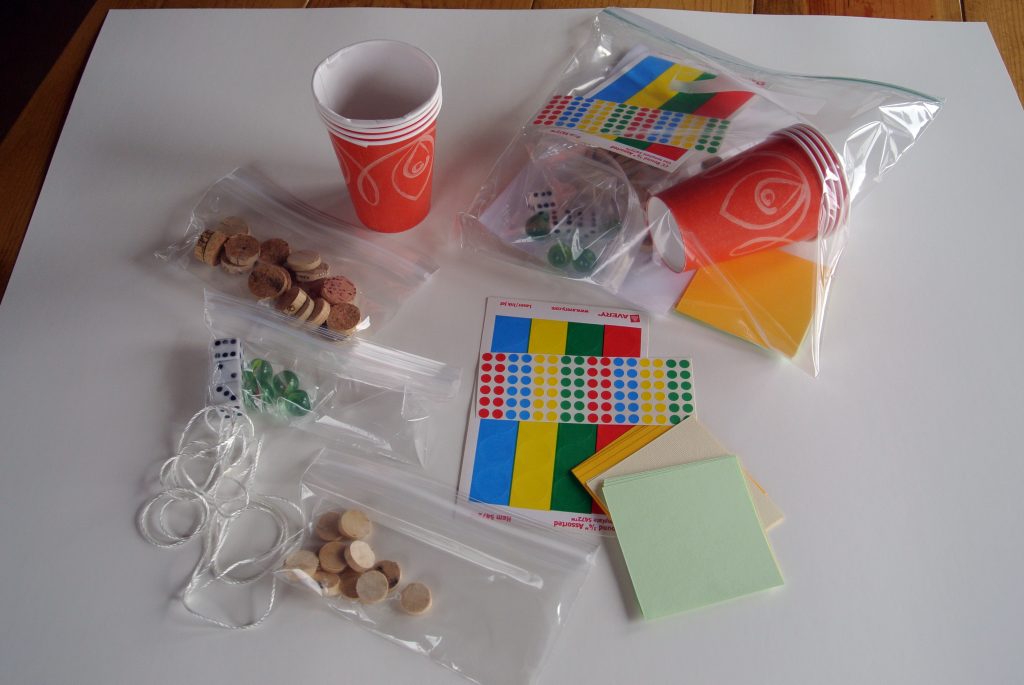 Kids were very creative with this activity. Some made board games with themes of natural disasters and buildings (a very rough take-off on Monopoly, but unrecognizably so). One group made a game that involved rolling marbles down a crack in the patio. Another designed a game that involved guessing which cup had a marble under it. Not all the games were finished due to facility issues, but the design process was successful, and lots of iteration happened.

In the afternoon, we had fewer kids; some had been there in the morning, and others were new. For the first time at this event, we had brought computers and had planned to do Minecraft, Flappy Bird at Code.org, and a few other things. There was one older kid who knew Minecraft so he worked with some others on that. 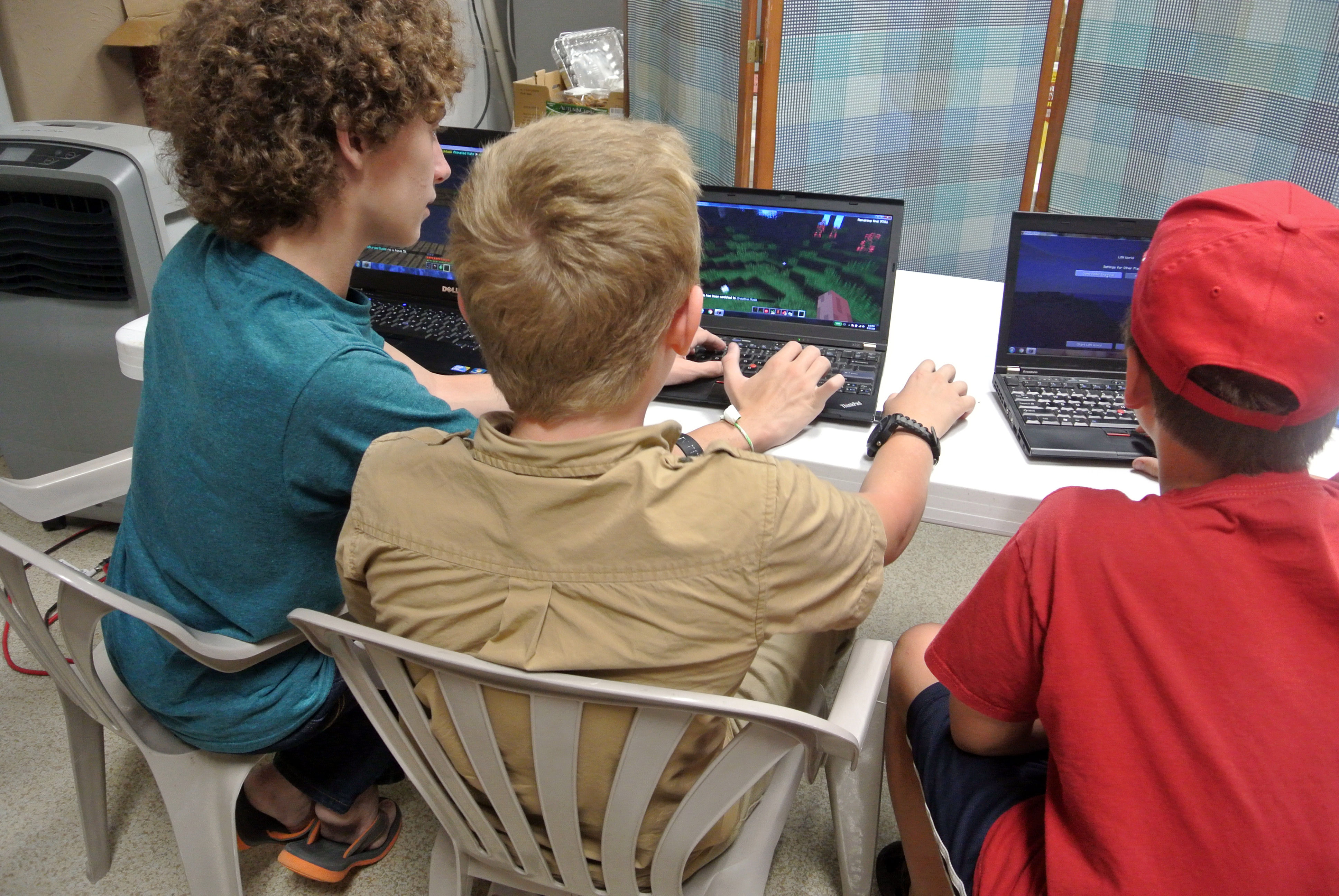 The others had a choice of playing more games, working on the game they were designing, working on one of the other computers, or finding something else to do.

What went especially well this year was marketing (we reached several new families including several who didn’t attend the accompanying adult event), the game jam in general, and the use of computers.

In terms of what I would do differently next time, I would like to have seen more of kids playing each other’s games followed by more iteration. (Logistical challenges made this difficult.)

I’m also thinking that next year we might do separate morning and afternoon sessions with the same activities. That way kids who only came to one half of the other would still have the opportunity to do the “best” activities. And kids who stay the whole day could either extend what they were doing or do other optional activities.

This site uses Akismet to reduce spam. Learn how your comment data is processed.